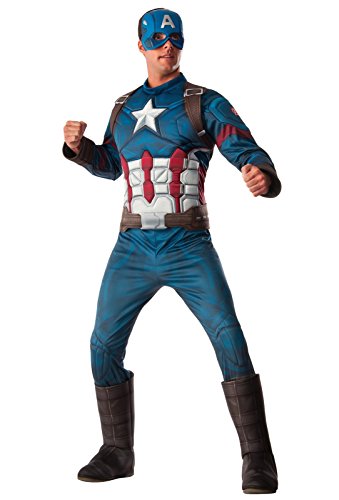 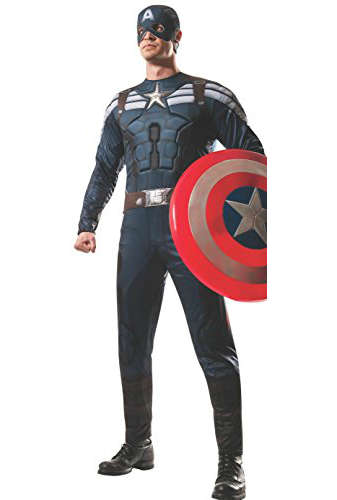 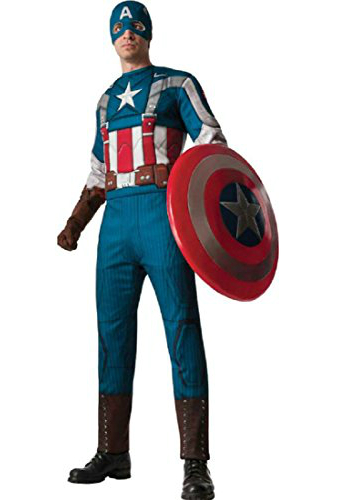 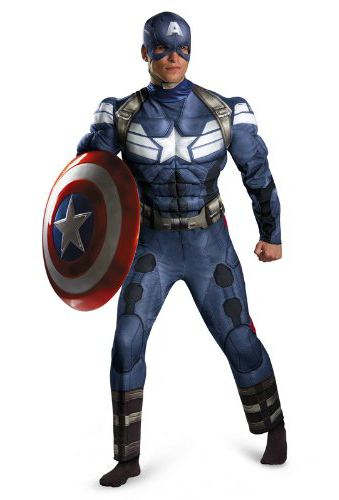 This suit is from the latest Captain America movie, Captain America: Civil War. It features clean attention to detail and it’s belt parts are layered over the 100% Polyester frame so it gives it a higher quality feeling to it. A nice feature to the Captain America: Civil War costume is that it isn’t over muscled so it doesn’t go against the classic look of this super hero.Take into consideration that these are mass produced costumes. So you’re getting a costume for the general public, therefore the mask may not fit perfectly. However, overall, this is my personal favorite of the Captain America costumes that we have listed. You might consider getting a second mask, just in case. As with all Rubies brand costumes, this outfit is licensed by Marvel Comics for guaranteed authenticity.

Here we have a Rubies, Captain America: The Winter Soldier costume for men. This costume has some padding to it around the vest and jumpsuit giving some needed durability. It’s really slick feeling and will hug your curves and crevices so we recommend wearing pants or a jock cup under it. This Captain America: The Winter Soldier suit is perfect if you plan on going with a group of friends all dressed up as Marvel characters.

The Marvel Universe Captain America Soldier Costume is an ideal budget suit. The plus side is it’s the lowest priced Captain America costume reviewed on our site, it’s colors are vibrant, and it’s a Rubie’s product, which means it’s Marvel Comics certified. Unfortunately, due to the fact that it’s mass produced, there have been instances where the velcro on the back wouldn’t close all the way.

Marvel has officially licensed this costume for your Halloween needs! It has padding in the torso so it will compensate for a small frame to give you a bulkier look. This Captain America costume is visually striking so you’re sure to get noticed at a party.